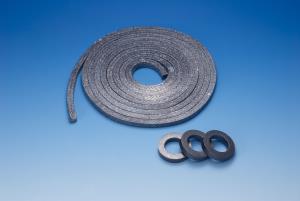 VALQUA No.
N133
Product name
Flexible graphite based general use grade
Features1
Coil packing made of expanded graphite yarn reinforced with stainless wire and braided into a square cross-section, and finished with PTFE dispersion.
Features2
These are alternatives for asbestos based general use products used as shaft seals of pumps and valves for handling water, oil and solvent.
Features3
This is a high cost performance, expanded graphite braided packing that can be used with general-use valves and pumps.
Features4
Low price product
Features5
Old product number: VC-22

This selection table lists up products recommended by us for various conditions, and does not necessarily mean that non-marked items can not be used. It should also be noted in advance that, depending on the service conditions, abrasion powder may be mixed into the working fluid.

Q. What should I use to cut the gland packing?

A. The gland packing can be cut with a sharp blade such as a standard cutter knife or kitchen knife of medium size or larger. Also, a guillotine packing cutter, which is a dedicated cutting tool that combines a scale and a cutting machine, is sold by Garlock, our partnering company in the U.S.

Q. Which is better for cutting the gland packing, bias cut or straight cut?

A. When looked at in one-ring units, both bias cut and straight cut have their advantages and disadvantages, such as the bias cut being less prone to leakage due to a long cut surface and the butt portion of the cut surface being less prone to shifting in the straight cut, but basically because this is a product that is used with multiple overlapping layers, there will be no difference in terms of using either cutting method.

Q. Why is the gland packing for pump used with leaking liquid?

A. Unlike a mechanical seal or lip packing, lubrication and coolability of the contact surface are secured by using it with leaking liquid. Using it without leaking liquid may result in the seizing, damage or short life of the packing. In addition, the amount of leaking liquid varies depending on the operating status of the pump and the performance of the gland packing that is used.